This past weekend I drove to Phoenix for the grand opening of the NCT Phoenix Improv Theatre - which is a sister theatre to the NCT Theatre that I perform with in San Diego. The NCT Phoenix is run by Dorian and Krissy Lenz who used to perform in San Diego, they are both originally from Phoenix. Why would anyone leave San Diego for Phoenix you may ask? Why give up the cool ocean breezes for sweltering urban sprawl surrounded by scorpion and cactus? HERE is the reason--- this little girl. She loves scorpions and thinks that they're crunchy and delicious. 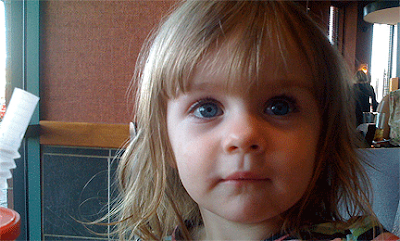 You gonna eat that scorpion, or can I have it?

Dorian and Krissy moved back to Phoenix because they had a little Zoe and wanted to raise her where she could be with both sets of grandparents.

NCT and Improv have been a big part of both Dorian and Krissy's lives so when they made the move back to Phoenix they had hopes of opening up a theatre of their own. After a couple years of very hard work they were able to make it happen... so I made the trek east for their grand opening. Which meant six hours of this--

What I wouldn't give for some road-rage about now.

And lots and lots of this...

Dry heat? Wet heat? It's still HEAT! So shut up!
The drive from LA to Phoenix takes about 6 hours, and once you're out of LA traffic it's really not a bad drive. Just straight on through the desert. I arrived in the late afternoon, checked into my hotel and then headed over to the NCT Theatre.

Wow! Real neon! Actually it's a bug zapper.
Dorian and Krissy's theatre is quite nice, with plenty of room - there's even an extra space where they can run workshops and classes. The theatre space itself is great, and seats 99 comfortably, or 115 uncomfortably. 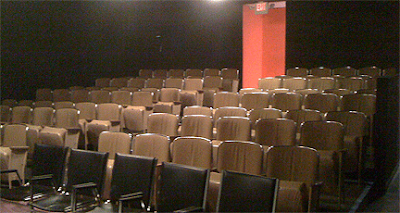 This "Grand Opening" was the official opening of the theatre, however they had done what's called a "soft opening" a few months earlier. This gave the improv performers a chance to get some shows under their belts before the big opening. While the group is still new, many of the performers have prior experience with improv or stand-up. In a little under a year, the Phoenix improv team has started with a strong foundation of players. 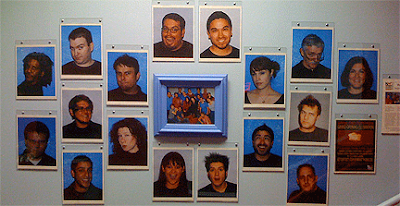 Why can't you just smile pretty and not make a face?
On Friday night - the first night of the grand opening - Dorian was short two players (one got called into work, the other got food poisoning) so I was able to jump in and play the shows. I had a blast!

Dorian in the "green room" getting ready for the show.

Dorian's favorite part of the night... counting the ticket money!

Hallway and main entrance to the theatre, all funky and designed by Krissy.

Thank God we said "paper" when they asked us "paper or plastic". 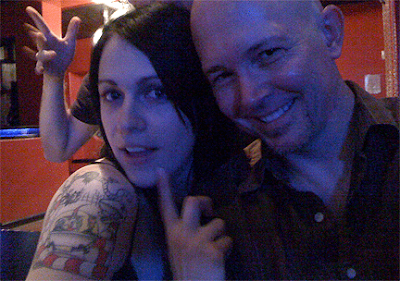 Me with Krissy. I used to think it was odd that she had
a Nightmare Before Christmas tattoo on her shoulder,
but that's nothing compared to the third arm growing out of her head.
The subject line for this entry includes "...& Roadside Oddities". And there were a few that I encountered on this trip. The most bizarre was in Phoenix at an outdoor mall. There were giant (like 15' tall) bronze rabbits around a fountain. I could find no plaque or sign explaining their presence, so I'll assume that they're evil. 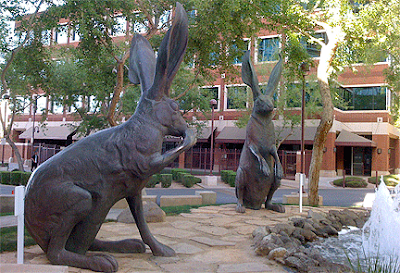 Ooo, I smell carrots. Was that you?

While on the way back to LA I passed by a weird trailer park... I guess "weird" and "trailer park" are sort of redundant. But this was in Quarzsite Arizona. The only green plants were the orderly palm trees around all of the trailers. I guess it looks kind of nice. But considering that there really wasn't anything else around, this stuck out like a toothless Mormon trying to eat a coconut on the Mayflower.

Finally, we each have our own family tree!
At one of my gas stops I had to get a shot of this... the picture does not come close to giving you the scale, the size, the sheer immenseness... but this was one big-ass flag! It wasn't just huge! It was big-ass huge!

I dunno what it is, everyday I climb this pole and just feel so.. damn patriotic.

And then on both my drive out and back I passed by field after field of wind-powered generators. I'd seen pictures of them before, but it's really impressive when you drive through one of these "wind farms".