I admit I'm a geek. I'm not a sports guy, although I played some basketball and ran track in High School. I've never been a jock, so I guess I fall into the "theatre geek" category. I attend comic-con most summers, primarily out of curiosity and because it's an important "meet n' greet" landscape for the line of work that I do.

This past weekend was the first weekend of the Renaissance Faire in Erwindale, CA - just east of Pasadena. I've only been to one "Ren Faire" in my life, as had Emily, so we decided to check this out, figuring it would be a fun afternoon on a Saturday. Our friends Rob and Terri joined us... no, we did not dress up - I left my codpiece at home. 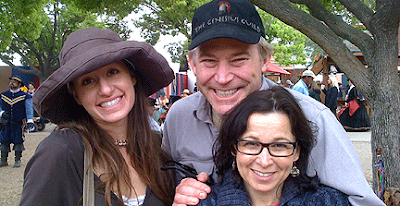 Emily, Rob, & Terri experiencing the wonders of the faire!
Rob was as giddy as a wee lass.

The faire ended up being a great time. At first we stuck out like lobsters at a rodeo, because most everyone at the faire was in some sort of costume, boddice, or covered in mud and straw - we weren't... well, not until the end of the day. Eventually more visitors like ourselves arrived, so we didn't feel quite so self-conscious.

There was plenty to see, do, eat, and spend money on. There were several stages of performers, some that were very impressive. Much of it was good n' bawdy, the way comedy was meant to be.

Ye have been warned.

The Poxy Boggards sing the praises of ale, women and hey-nonny-nonny.

The costumes people were wearing - and this is the majority of the folks walking around - were amazing and quiet elaborate. While snapping pictures of some of the more stately attired, I got to meet the Queen. 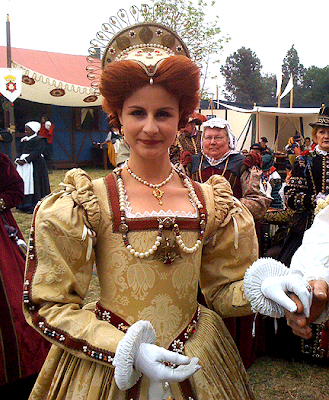 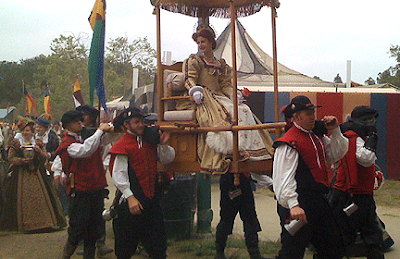 This army sucks!
There's no way I can kill someone with a trombone.

The court ladies farting guild.
Where the word "blunderbuss" was first coined.

It was a relatively short, but full day of wandering around and observing the lengths at which people will go to for something they enjoy. The jousting was very impressive. Say what you want about the Ren folk, but guys on horseback, in full armor, speeding at each other with lances - even if they're made to break - takes some skill and nerve.
Posted by Tom at 12:32 AM 2 comments: